Skip to content
Home » Blog » How to » Blue Screen of Death caused by Netio.sys fix

I recently had a literal week of hell where all sorts of inconsolable issue where popping up from my website to my trusted work station computer constantly giving me a Blue screen of death (BSOD) and indicating that the issue was caused by Netio.sys. This article will be focusing on the BSOD caused by said file and how you can fix your own PC as I did if you encounter this issue while using your computer.

Firstly some context, I recently started to run Windows 10 and did this by upgrading from Windows 8, I personally hate upgrading and would have rather done a clean install but decided to go the way of an upgrade. A few months later with all things going well I started to encounter some issues and decided to restore, since that did not fix the issue I did a clean install. Soon after this I noticed that after one day every time I used the internet in any of the browsers Firefox or Chrome the computer would crash to a blue screen of death. 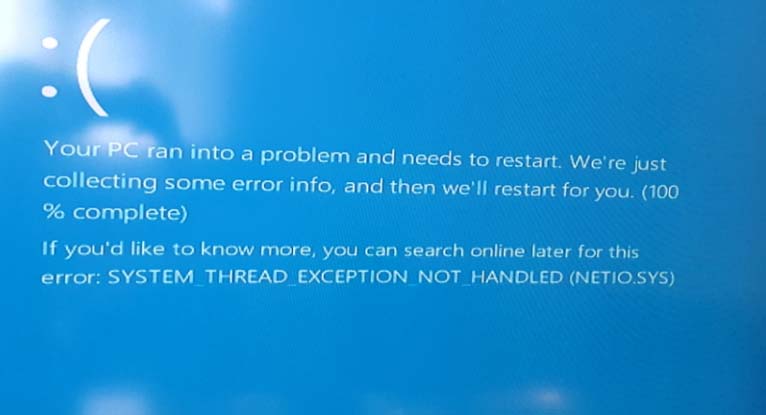 The screen read: Your PC ran into a problem and needs to restart. We’re just collecting some error info, and then we’ll restart for you.  (100% complete). If you like to know more, you can search online later for this error: SYSTEM_THREAD_EXCEPTION_NOT_HANDLED (NETIO.SYS)
I literally tried every trick I knew in an effort to try to fix the issue and found many suggestions online but none fixed my exact problem. I eventually found the solution by experimenting and I have recorded it here not only to offer a fix to other but also to guide them in fixing this said issue for themselves even if the issue is not being caused by the same program as in my case.

What you need to Know about Netio.sys?

First of all Netio.sys has to do with your motherboard network driver and something is causing an error or conflict with the driver which resulted in the BSOD, this was my first clue and the most important thing you need to know about this error.

How to fix the Issue and Stop the Blue screen of Death Errors?

First of all reformatting Windows to fix the issue as you might be tempted to do will not fix the issue seeing it’s a driver that causing the issue the first thing I suggest is for you to:

1. Reinstall the network drivers for your motherboard, I also suggest that you only install the pure drivers without the fancy control suit thats usually bundled with this driver.Most manufacturers usually offer both versions and the one I am referring to is usually smaller in size to the full suit.

2. It took me days to figure this one out but the solution that worked for me was to actually uninstall my Antivirus which in my case was AVG which was conflicting with my Network drivers and causing the blue screen of death, I guess it might have been the Firewall component that was not playing well with Windows 10 in my case and each time I launched a web browser it triggered the effect, when things were really bad it would just shout off as it felt a mind. In the mean while you can either run Windows defender or find another Antivirus solution.

I also guess that I can revert to Windows 8 and then upgrade as in the first case when I did that I had no issues. I have yet to test that as a solution of keeping my preferred Antivirus but I would like to put that out there in case others might be looking for not only stopping the issue but also fixing it.

3. Note that any program could be triggering the error with this problem other than your Antivirus the others suspects I have found include: Utorrent, Other Antiviruses or any other program that might use or interact with the network driver, do not rule anything out.

I hope your were able to fix the netio.sys issue, its a really unique and very frustrating problem as its very hard to pinpoint whats causing it especially if you did a total reformat which usually fixes most normal problems and still have the issue. Please share your experience with this error as your exact solution and story can really save someone the burden of trouble shooting this issue for days as I have taken the time to record my findings. You can use the comments below and be as detailed as possible.