The iPhone 6 Rumor Mill is in full swing and everyone is anticipating the new features that will be present in the long awaited iPhone 6 which promises to be the best iPhone to date. Have you ever wondered were most of these leaks and rumors originate? Well we were thinking the same thing and we have put together a comic strip series that makes fun of the idea in a new series that I will be calling: TechAdventures you can scroll to the bottom of the article for the comic.

In the mean time I would like outline some of the top rumored features to arrive with the iPhone 6.

2. Near Field Communication (NFC): This feature as long been missing from Apple devices and the added NFC features are not for data sharing as you might be thinking but for mobile payments such as paying for stuff using in phone apps such as the Starbucks apps and so on.

3. Touch ID: Apple will continue its Touch ID sensor and it will only improve as new ways will most likely surface to use the touch ID sensor.

4. Curved Display: This rumor is the strangest of the lot and most likely will remain a rumor. Curved screens are not strange occurrences as they are already on the market, but I can hardly see Apple switching to curved displays.

5. Improved Camera: It is rumored that the camera will be boosted up to a new standard of 10 or 13 megapixels with improved software technology for a better picture quality.

6. Silver, Gold and Grey colors: There will be little change here and these are the same old colors that were introduced last generation making a comeback this season.

7. Apple A8 processor: Rumored to be a 2 GHz dual core processor, don’t be daunted by the fact that this is a dual core as rumor suggest it’s so efficient that it can out perform its quad core rivals. So in the end more cores is not necessarily better.

8. Larger 5.5 inch Display: This is basically one of the most significant rumors and major changes speculated to be present in the iPhone 6 and that’s a much larger screen size, some even suggest that there will be two (2) variants, a 4.7 and a large 5.5 inch device.

9. Updated operating system: Promises to run an updated version of iOS mobile software which should be expected as every major flagship device usually boasts an updated mobile OS that’s flashier than its predecessor.

10. Wireless charging: It will eventually happen and iPhone 6 might be the right platform for apple to go to wireless charging for its iPhone line, this just screams Apple style.

11. Sapphire Glass display: The display of old iPhones have been a sore point of iPhone devices for years as they break quite easily, this may be a thing of the past as sapphire screens promises a more durable and scratch resistant screen. Talking about displays we are also expecting a higher resolution screen that promises to be more stunning than anything on past iPhones.

12. Liquid metal design: This promises better touch sensitivity and overall build quality in how the device is held together.

13. Apple iWatch support: Yep smart watches are the big thing now and everyone’s awaiting apples offering in the smart watch category no doubt the iPhone 6 is the perfect platform to feature it with.

15. Heart Rate sensor: Health and fitness monitoring is the new trend and you know that apple will not be far behind with this one, with fitness apps such as Healthkit already in hand you know a heart rate monitor like Samsung very own is not far behind. it’s rumored that Apple will implement this through its ear buds, now that’s unique.

16. Thinner design: it’s rumored that this will be the thinnest iPhone yet and one of the thinnest devices on the market.

17. No Bezel: The Bezel less design is so cool its like the bezel less design on the TV sets that leads to a more immersive viewing experience and we are hoping that this one is true for the new iPhone 6.

So as promised at the start of this article we have the first in a series of Technology comics here on BlogTechTips.com called: Tech Adventures, the story is written by me Ricardo Gardener. The first episode is called “iPhone 6 Rumor Mill” and comically looks at the iPhone rumors and there origins. So here you go: 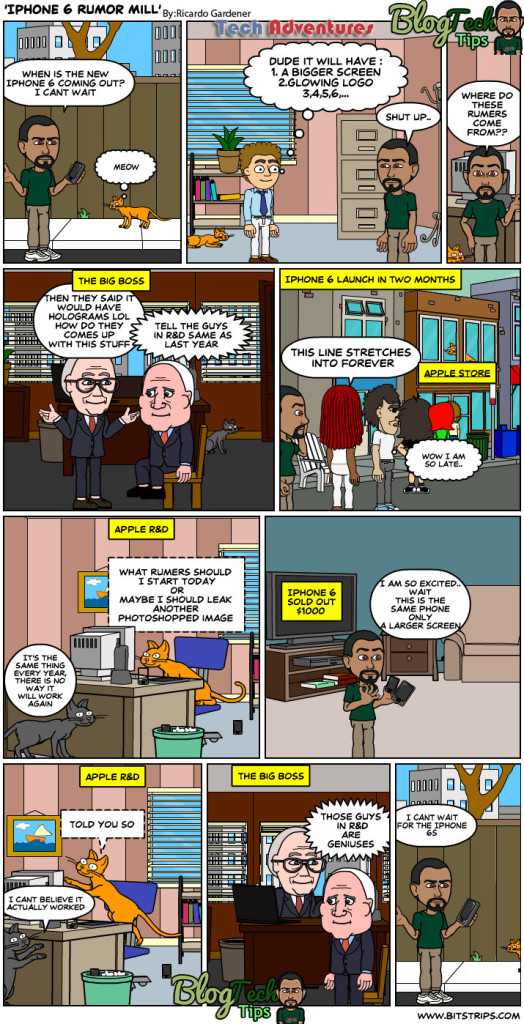 The new iPhone is estimated to arrive in September 2014 and its any ones guess as to what the final device will look like or which features it will have. There is one thing that’s for sure and it is that our appetites are wet and we can’t wait for this new device to reach store shelves.