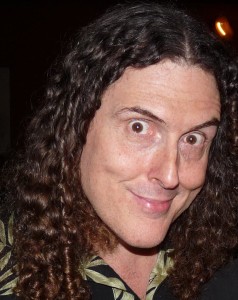 Weird Al has many titles beneath his belt and he is quite a funny comical guy that you can always depend on for a good laugh. Just this month has seen some of his best work yet and some of the Funniest parodies that I have ever personally seen of popular songs that we all love, along with popular cultural references to things that we all can relate to. Plus with Weird Al Yankovic’s new album becoming a smashing success due to clever marketing strategies involving the first four (4) videos below plus others this month,has seen great success for his new album. Updates from him on twitter shows an elated Yankovic who tweeted several times is thanks to fans:

I’m so pleased everybody is enjoying the album, and I’m enormously grateful for everyone’s support. Thank you, thank you, THANK YOU.

The Album entitled: Mandatory Fun is already a Best seller on Amazon and Weird Al has reaped the benefits as he has now topped the charts with is latest success a first time feat for the star:

So with all his success who knows what the future will hold for him,but to close off our best of Weird Al Video performances we would like to take you back in time by looking on one of his Classic Video’s from back in the day that we all should see, that is as funny as the day it was released on YouTube and we all had some great laughs: