iRobot Roomba 880 Vacuum Cleaning Robot when compared to other devices of the same type there is no comparison as it literally leaves the completion in the dust so to speak and much resembles something out of The Jectsons. The  Roomba 880 uses sensors and artificial intelligence to find dust and dirt and easily cleaning it up effortlessly without you needing to lift a finger. Its only sole purpose is to seek out dust around the house in a never ending war. Even your pets will be amused by this Vacuum robot.

How well does the Roomba 880 clean? 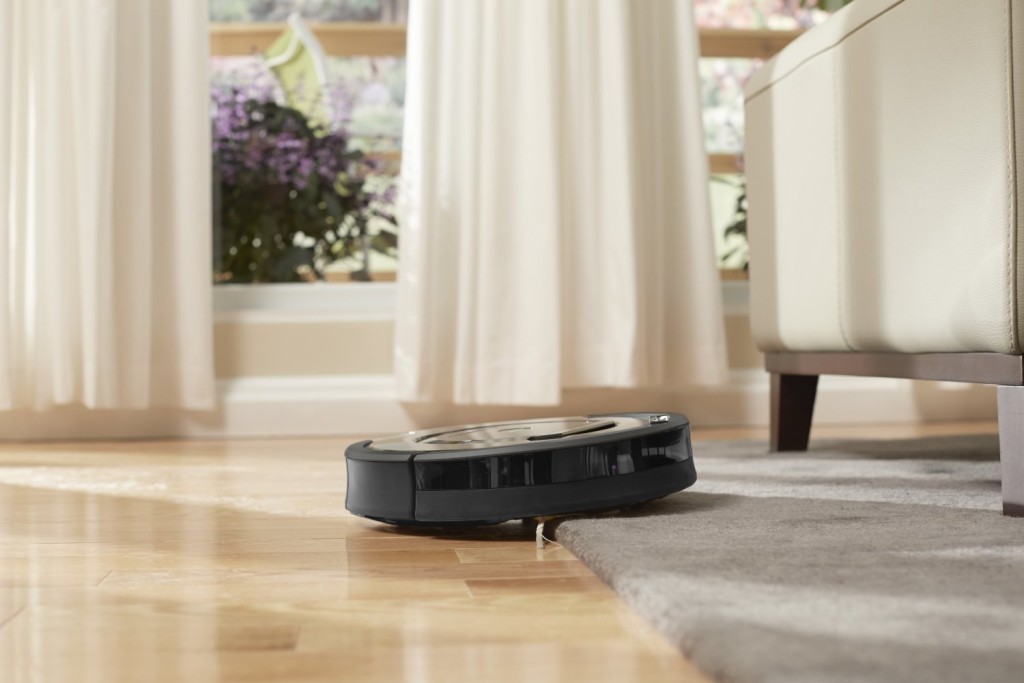 Most models of cleaning robots, especially older units fail at cleaning one thing or another, especially at things such as cleaning up animal hair, dirt spots, dust or fur balls, the Roomba cleans all this and much more, a good vacuum is measured by these margins and usually when it cannot clean a particular type of house grime or dirt then that’s were we all give it the disappointed thumbs down, I can honestly say that the Roomba 880 goes above expectation in its cleaning ability and has more than satisfied it its job, cleaning all types of house hold messes that I can think of effectively. 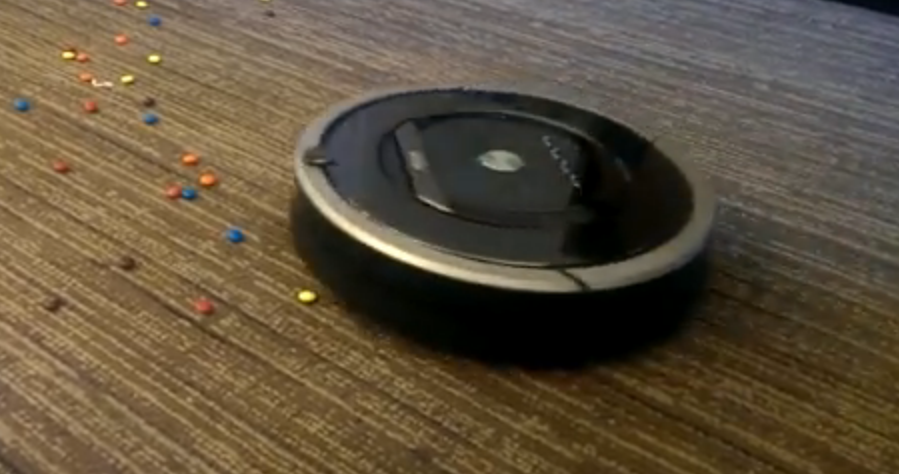 While being far from perfect The Roomba will at times get all the dust or grime in one go but ever so often it will miss a spot but rest assured it will double back and get all the residue it missed which says allot for attention to detail and cleanliness absent from rival units.

In my opinion the Roomba cleans better than a traditional upright Vacuum or gives it a solid run for its money leaving you with very little to do in between major house cleaning sessions.

Well lets face the elephant in the room, this device is not cheap not by a long shot, but before you turn your nose at the price the Roomba 880 is the best at what its does, even better than its older counterparts which we will explain it detail as you read on. But you do get what you pay for as this is one of the most advanced house cleaning technologies on the market that will save you hours of effort which more than justifies the price.

So check out the cost and the listing for more details:

The iRobot Roomba 880 bears a stunning resemblance to its predecessors in term of the usual look that we have come to expect from the Roomba series with the perky sensor at the front of the unit, the handle with the iRobot Roomba engraved in it  made for transporting the device around the house should it be necessary, now if you are familiar with the past units you might think there is not much improvements or difference that distinguishes this new model from the units of the past but there is more to this unit than meats the eye.

The most noticeable changes can be seen when you flip the unit over to the underbelly you will notice a spinning dust collector right next to the new extractor module that sucks the dust-up into the dust bin which resembles two rubberized rollers, the older models including last years unit which the iRobot Roomba 880 replaces uses a rubbery bristled extractors that resembles a brush which was very ineffective at dust collection. 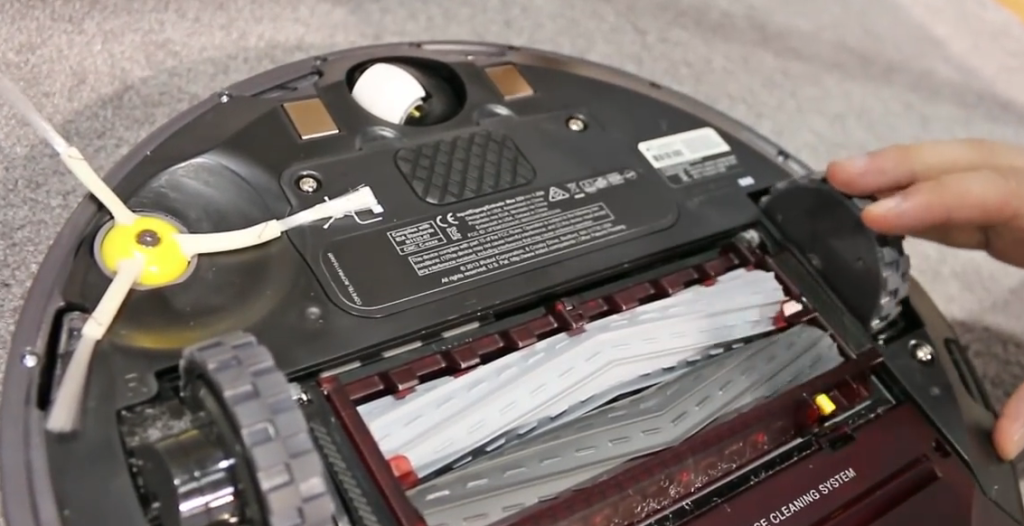 The new dust extractor allows for improved dust extraction and outperforms the older model by leaps and bounds.The exceptional performance of this unit is seen in pet or animal hair removal or cleanup which most units fail miserably at doing, so its clear the new extractor mechanism for cleaning is doing a fine job. Its advised that you skip the Roomba 790 which is closely priced as the Roomba 880 which provides a better cleaning experience.

Note that the Roomba 880 is not intended to replace your traditional vacuum cleaner by itself but actually to compliment it and cut the work load that would be associated with regular vacuuming thus saving you on time and effort. It’s also great for reaching hard to reach areas such as beneath furniture and areas such as the bed that often get ignored by traditional vacuum cleaners.

The robot also is known for finding itself in the most unusual of places and it can get stuck at times bumping into stuff until it self corrects. But do not fret as the unit and its sensors will protect the robot Vaccum from potential pitfalls such as falling down the foot of a stars or banging into solid objects. Unlike previous models that would become stuck as it transitioned between variable surfaces the iRobot Roomba 880 moves across them quite well. Also forget about it being caught in things like the tassels on a rug as it will simply glide over such surfaces, this is thanks to the rubber rollers from before on the bottom of the unit, older models such as the Roomba 790 with its brush like dust extractors would have been easily stuck. 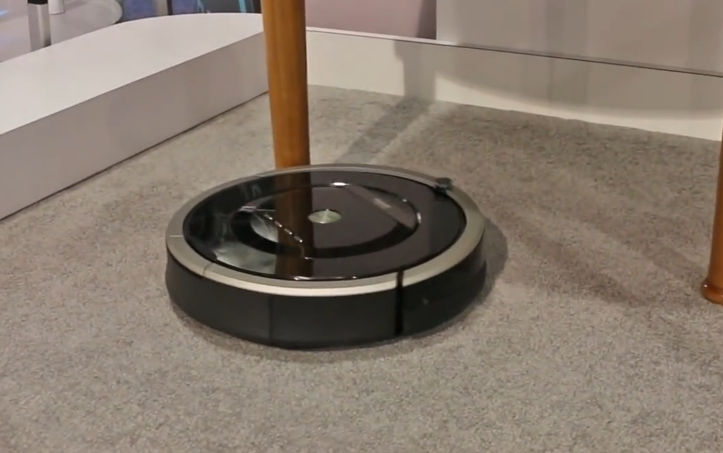 The Roomba 880 can be configured as you like, you can even set schedules to have it clean to your personal preference. After making its rounds the unit intelligently finds its way to its charge station where it can recharge easily. The dust tray makes cleaning easy all you have to do is pull it from the unit and pop it open, just my type of simple that easy to clearn and remember, you will be surprised how much dirt you can actually accumulate in the dust bin especially from animals that are shedding and you will know that the iRobot Roomba is actually doing its job. It also hums along would being super noisy which is a big plus for those who need their silence.

Who is this Device for?

The Roomba would make a great gift idea for almost any occasion such a newly married couple to assist with the house chores, a bachelor that has moved into his own apartment and as you know cannot be bugged down with house chores, the wife that need an extra hand around the house and best of all for the Tech savvy dad that must have the latest advances in technology. Plus the pets will love it and be totally fascinated by the Roomba which brings us to the point that if you have pets who you love dearly and cleaning up after them or the kids is necessary then the Roomba 880 is a must have device.

See it in Action

Check out this video to see the Roomba in action and how it actually works:

To keep your iRobot Roomba 880 ruining at peak performance levels we suggest that you pick up the following necessary accessories to protect your investment:

1. Replacement Side Brushes and Filters

Keep your Roomba 880 running at peak performance with original filters and side brushes which will ensure that your Roomba operates just like the day you bought it originally.

These rollers are the magical part of the new 800 series of Roomba and the secret behind the units ability to clean effectively and avoid sticking on different surfaces, you would be wise to have a single set of backup rollers on hand for when the originals go.

1. Cleans hard to get to areas such as under beds and furniture.

2. Give a superior clean when compared to the older Rooomba units.

4. Improved robber rollers that significantly improves the ability to clean as hair does not get stuck in the extractor brushes  like older models.

6. Handles varying surfaces effortlessly and does not get stuck on obstacles such as string and tassels of carpets.

2. The larger bin in this model fills up quite quickly when dealing with shedding pets.

What Customers are saying about the irobot roomba 880?

Around the web customers have been saying great things about the Roomba:

“This Roomba is a masterpiece. Or at least the sonnet that I’m going to compose to it will be….”

“I have dogs and cats and live in a dusty old wooden house. This little vacuum does a great job against these odds….”

“I named mine “Roger”. Yes, he was expensive, but oh….SO worth it! Even my husband likes to vacuum now….”

The iRobot Roomba 880 unit is priced at a premium but you do get what you pay for, a device that can give you more free time which translates to fewer hours cleaning the house and more time doing the things that you enjoy doing. After all one cannot place a price on your time. So if you want to have more time to do other stuff while the Roomba hustles away cleaning up after you on a consistent basis then I suggest you get one, the price is totally wort it i terms of hours you will save. Think about it with this unit you will be one step closer to an automated home and device that do everything for you while you relax which we all would love.