Skip to content
Home » Blog » Review » Which should You choose:LG G3 or S5?

If you are wondering if you should get the LG G3 or S5 as your next phone the task of figuring out which one would give you the better bang for your buck might not be as clear-cut as you might think. Join us as we take a close look at the LG G3 and the Samsung Galaxy S5 and decide which one is worth your time and your hard-earned cash, we will look at the advantages and the disadvantages of both phones and compare the pros and the cons as we help you in deciding which one you should ultimately go with.

Both phones are almost identical in their choice of material construction, while metal and glass would be a more premium option considering the cost of the devices both manufacturers have opted for a plastic body construction. Both devices have moved away from glossy plastic which is a fingerprint magnet and leaned to a more hardened exterior as the S5 has a gulf ball like finish on the back and the LGG3 finishes things off with a nice  hardened plastic with a brushed finished that almost looks metalic from a distance. 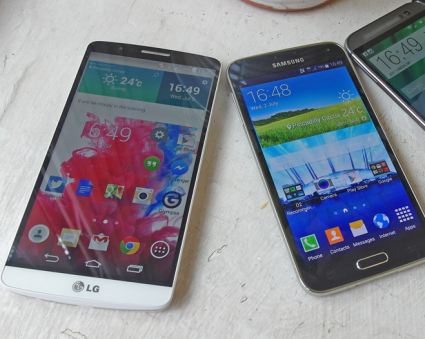 The LG G3 however has a nicer exterior and while its button placement may be a bit odd to first time adopters the home button on the back is a welcomed changed from traditional placements that we have all grown accustomed to over the years.

The G3 has a greater screen real estate which will look much larger than it actually is as when both phones are placed side by side the LG G3 is only a few inches wider. The noticeable difference in screen size is because the G3 has opted for very thin bezels while the Galaxy S5 has the traditional bezel styling which can detract from the viewing experience once you notice what LG has done to gain its wider more immersive look.As a redeaming quality the Galaxy S5 excels in one handed operations and easily edges out the larger LG G3 if you find your self in situations were one handed ease of use is a must.

The AMOLED screen on the Galaxy S5 features a great and saturated 5.1 inch screen at 1080p with 432PPI and looks much nicer than that of the LG’s 5.5 inch 250 x 1440 534 PPI display dues to the vibrant colours. The S5 screen simply pops at you and gives a vibrant and rich colors that looks great to the eyes. The LG colors are a bit lack luster in comparison, this contrast can only be seen when both devices are side by side. Where the LG G3 excels however is with the larger screen size and high-resolution in areas such an on screen text, web browsing and so on which looks nice in games and videos due to the higher resolution and greater pixel count, but over all the S5 gives a better display of colors. The viewing angles do suck when viewed from either devices from the sides, although since you will be sitting directly in front of your device this is hardly an issue in either case. 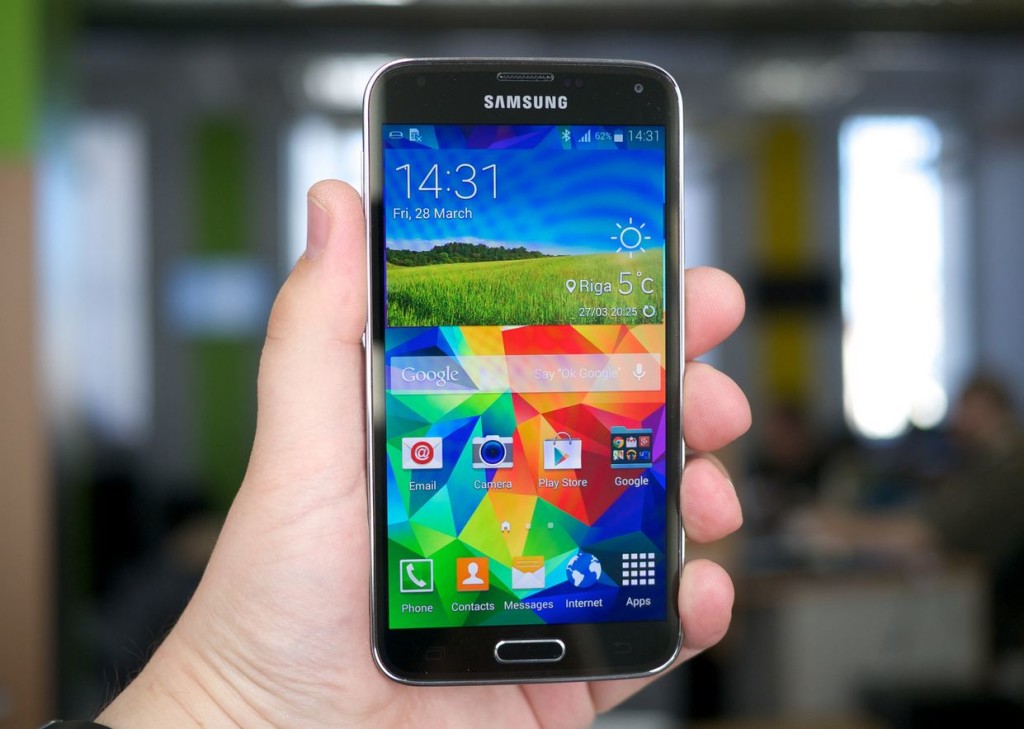 The Galaxy S5 shines through with its notable features such as dust and water resistance which the LG G5 does not have and is well suited for those who may be out and about and in need of these features. I personally like the Galaxy S5 primarily because of such features which makes carrying your phone along with you an after thought in situation you would likely leave it behind.

The Galaxy S5 shows its stuff once more by featuring a built in heart rate scanner that can measure you heart rate as soon as you place your finger over the available scanner at the back which is a really cool feature that sure to grab attention. This is also bundled with a bunch of fitness features for those seeking to stay active and healthy.

Another cool extra is the S5 also carries a finger print scanner that you can use to unlock your device which is a cool and welcomed addition which all users tend to like and is one of the more eye-catching features of the S5 over its predecessors.

Using Your Device as a Remote

Both the LG G3 Galaxy S5 can be both used as a remote which is something that they share in common. This can be very cool and adds to both phones useful capabilities. 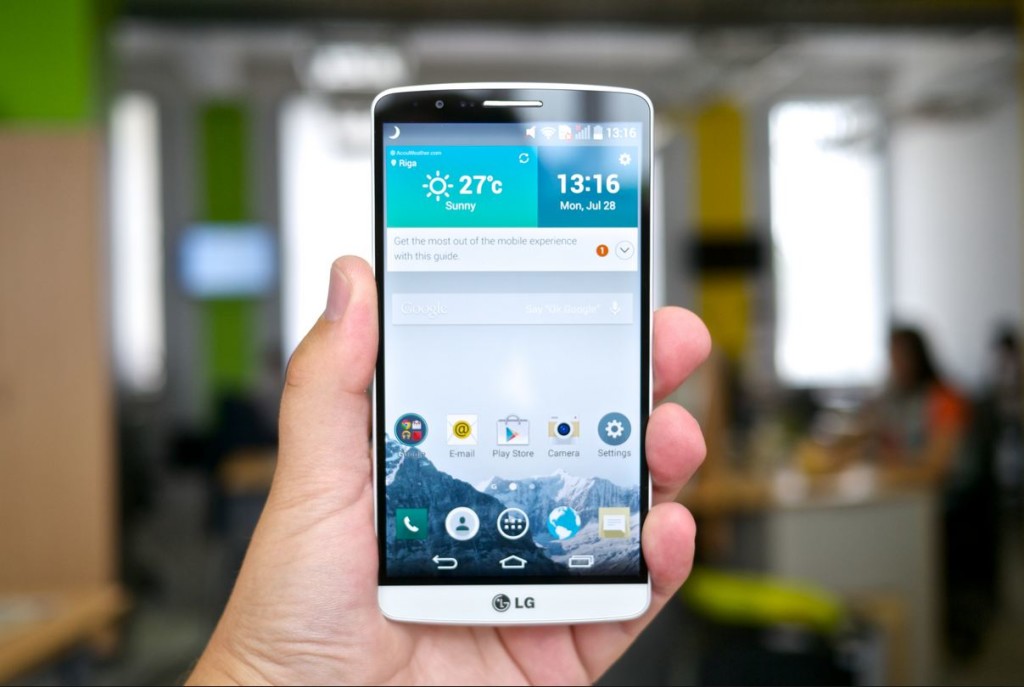 In terms of processing power both devices stand on equal ground and you will hardly notice any difference between either even through the S5 has 2 gigs of RAM and the LG G3 has 3 gigs. Both devices were able to handle anything thrown their way and the only hiccups in either case can only be found in the on-board operating system of both and is not really lag but for the most part fancy effects such as transitions and so on that makes both seem to lag.

Both devices features a removable battery which is a great features for those who may look towards replacing their battery during the day to keep tapped up on power or replacing it outright at the end of its life cycle. There is also an option for a MicroSD card on both devices which is great for extending the memory capability as you choose. Plus you never have to worry about availability as all major US carriers will carry these both popular devices.

Speaking of batteries while both smartphones feature decent batteries the LG G3 pulls ahead this time and has a battery that will easily outlast that of the Galaxy S5, so long after the S5 battery is depleted the LG G3 will continue going like a champ. You may want to keep that in mind as you decide on going either LG G3 or S5.

The Samsung Galaxy features a great camera that takes very nice pictures with great colors that are catching to the eyes. The details of your pictures will be captured very well once your are in an ideal lighting condition at an impressive 16 mega pixels.

The LG G3 is on the other hand is no slouch and it too has a respectable camera. The coolest feature of which is the laser focusing system that helps to improve picture quality by automatically stabilizing shots, this feature is better and faster than the focus on other smartphones you can find in the market. The Samsung Camera is however more feature rich and offers more luster to all the pictures which may be very attractive to some users. While the G3 will takes great focused shots automatically where the S5 will need a more stable hand not to mess up the shots.

Over all both phones suck in taking pictures in low lighting condition so bear that in mind when you are taking a shot on either, to compensate on the S5 I tend to take several shots and take advantage of the fast auto focus, the LG G3 can take less shots and each will turn out better on the basis of being focused.

The on board software on both devices which Samsung and LG added their own twist on their flavor of Android both have noticeable tweaks to the Android interface that makes using either device quite nice.

Samsung has gone with a more circled styling that found in all aspects of the TouchWiz interface and you get the full complement of cool and useful features such as air gestures and more.

LG on the other hand has implemented features that’s more focused on making things compact by hiding elements in the user interface and the G3 has finally created its own version of multi-window which will add to the devices multi-tasking ability. There is also smart features such as Smart cleaner which is a welcome addition. Also the feature that we all like is LG’s knock code which makes access to your device easier or you simply knock your device to unlock.

Both phones are priced at a great price point righyt now but if you are going for the unlocked edition you will find that the LG G3 is the more affordable of the two with Samsung coming in close behind but the extra special features such as finger print scanner and heart rate monitor does make the difference worth it. Other wise you can get either on any carrier of your choice.

That pretty much Raps things up for the comparison of the LG G3 and the Samsung Galaxy S5 which are still great phones that will be around for a very long time. The LG G3 features a very large screen and features lots of bells and whistles that any user would want and on the other hand the S5 is equally capable but with a slightly smaller display that makes up in additional features and a vibrant display that’s gorgeous. Both phones are great and while Samsung has a finger print scanner and the works the G3 bounces back with a 2K screen that anyone would love.

Its hard to count out the LG G3 in this regard as we might have in the past. As to the big question of LG G3 or S5? both are great choices and your decision will have to be based on what features you are looking for that will match your life style and your personal preferences. So go ahead and choose your device of choice based on the highlighted merits we have pointed out above.