TrackingPoint Labs who is known for developing Advanced Firearms Technology has developed a system that allows a precision Guided Firearms to be paired with a Google Glass app and get this: Give users the ability to  make accurate shots from around corners.This includes positions that it would not traditionally be possible to actually make accurate shots, including over barricades, around the side or to the back of objects.

The Trackingpoint “shot view app” as it is called by the Research and development team is paired with the Networked tracking scope which affixes to the firearm and  streams video from its Heads up display (HUD) to select nearby WiFi devices that includes Google Glass. Its to be noted while Google Glass is the more convenient option that this technology can be applied to any number of smart technologies such as smartphones, tablets and other wearable technology.

The Apps data can also be shared with additional devices in remote locations by WiFi and Bluetooth. This is truly a step into the realm of science fiction from such Movies as 2008 hit Wanted which main Computer Generated Image (CGI) trick was the characters ability to shoot around corners, now we are all normal humans here and not super spies so for now we will have to depend on devices such as Google Glass and Google Glass Apps to give us strategic advantage in combat situations. 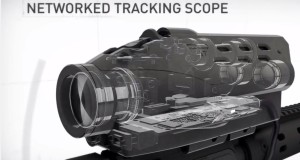 This Technology has added a whole new dimension to warfare and a new way to look at weapons and the relationship they can share with your gadgets. After all it was only a matter of time before some one came up with something like this as a Google Glass app, but I guess Trackingpoint beat everyone else to the punch.

So readers what do you think of this new development,could this save lives on the battled field or your own life in a tight situation or will this be misused by the masses, share your views in the comments below.