Mortal Kombat 10 is scheduled for release on December 31,2015 for all major consoles including PC, XBox one, PS4,XBox 360 and the PlayStation 3 respectively. Dubbed Mortal Kombat X, the latest Game in the installment features a brutal Kombat system, improve Graphics, New Characters and more Blood and Gore than ever before. 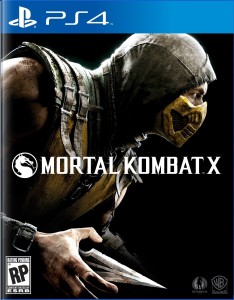 Mortal Kombat Fans will be pleased the world over as the new version will support online play for Warriors to refine their skills as they go up against players from across the Globe.The game will run in Full HD (1080p) and features an awesome 60 Frames per second refresh rate, this translates to super fluid Game play which is ideal for a fast pace action series such as the Mortal Kombat 10 Franchise.

What we Know so Far?

The footage as can be seen from the video below is straight from the PlayStation 4 console, at the opening sequence of the Video the question appears on Screen:”Who’s Next?” at the E3 unavailing. We see a heated seen between Scorpion and Sub-zero as they feud over the maintaining of Scorpions innocence by Sub-Zero. A new character in the form of a Bug lady and A child like creature mounted on the back of a giant of a man makes their appearance.

The combat system as been better refined and classic moves look better than ever due to the new graphical engine that is used, there is even more detail as moves are executed and hit their target in fine style.The new dual characters are also not just for show as they use their abilities during battle in fine style, such as the giant subduing a character as its smaller more vocal counterpart takes its pick at you. Bug Girl also uses her bugs towards your detriment mid combat with great efficiency.

And the finishing moves ooh how Gloriously detailed they are choreographed as you send your enemy into the after life in climatic glory, seeing every dislodged bone, broken neck or shattered organ.So far I am very impressed and looking for great things from this title.

Be the first in line for this super awesome title that promises to give you ultimate bang for your buck by Pre-Ordering Mortal Kombat X right now for your Console of Choice: