The Successor to Windows 8 is already in the works and will be hitting the market as soon as next year 2015, so you might have noticed that instead of a Windows 9 Microsoft has decided to skip a number and go straight for Windows 10.

Theories are already circulating that the reason for the sudden skip is due to old software code as programers back in the day would use shorthand in the days of Windows 95 and 98 and would use Windows 9X to refer to either version of the named 20 year old operating systems and believe it or not there are businesses still using those old antiquated versions of windows. So because the old code or shorthand may be existent in these old ancient windows or in some software on them and if the new operating system were to be called windows 9 then you could see how this might cause confusion issues and run the OS into compatibility issues.

This is sheer speculation by the way so take this with a grain of salt on the reason for the number skip, but its official the next windows is definitely Windows 10. 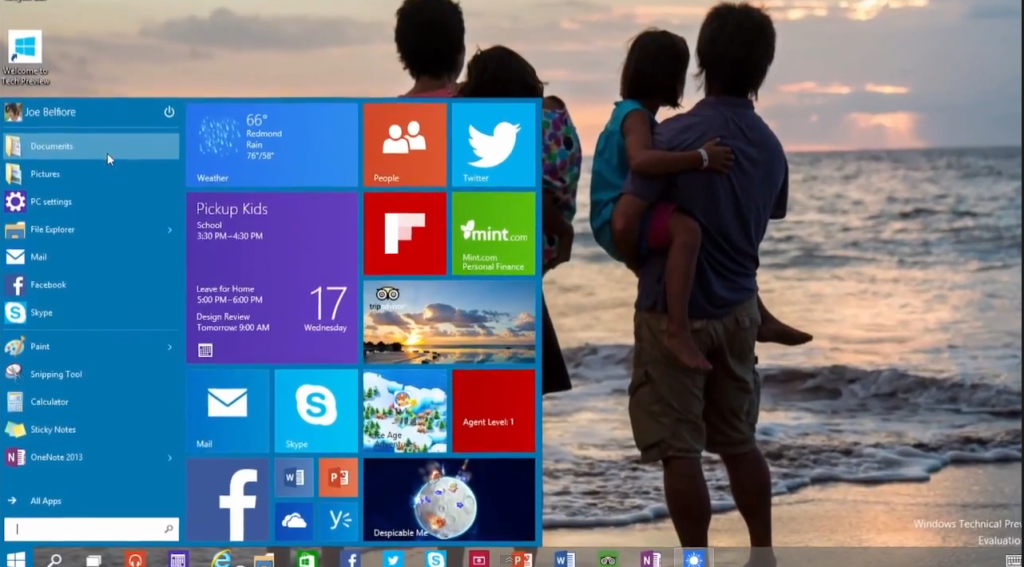 What Have we learned so far from the Developer Previews that have been Leaked?

The traditional start menu is back (Yay) with a twist this time the tiled interface has been included on the right of the menu with the usual programs list on the left. The tiles are flexible and can be arranged or moved around as you see fit as in the Windows 8 start screen. The size of the start menu can also be resized to your liking or to the amount of apps you have pinned.

In the Windows 8 technical Preview as seen above in the screen shot the search bar has been integrated into the start menu and will do local search as well as integrate web content into your search results.This s a convent little feature that will come in handy for making a seamless transition from desktop to the web.

The Windows that border a menu now are thin and seamless unlike the traditional thick windows borders that would clearly define a menu whether it be a browser or folder,file explorer has been revamped a bit with a new icon and elements within explorer. The new version of windows also features added icons for drives and This PC icon and the start screen apps like store can be resized and snapped to either edge of the desktop home screen.While snapped to one edge there will be a preview of the other open windows in a small thumbnails on the adjacent side.

Gives you an overall preview of all the open windows and apps. You can create multiple virtual desktops to keep your workspace clean and well-organized.

Other than it looks the same Microsoft promises new features for the update command prompt (CMD). Code junkies will really enjoy this little update and should be really excited about the added features.

Remember that this is only a developer preview and features are subject to change as Microsoft refines and adds and removes features from the new windows, so far the build looks promising and it’s still early days for the technical preview. So stay tuned to BlogTechTips.com for all your latest developments in the world of Technology.