So guys today I am really excited about this fix because it was plaguing me for a very long time. It’s finally fixed 100% and I would like to share how I did it in this article. First let me explain what happened for reference then explain the fix. I have a Samsung Galaxy (Applies to any Phone) and I first noticed that the phone was working fine and then all of a sudden Whenever I called someone or someone would call me they would complain that I was very low and they could not hear me even with max phone signal strength or coverage.

I though maybe it was a hardware speaker issue and the speaker was going bad. Although callers would say they could barely hear me versus not hearing me at all. I had another phone so I started using that and then used the phone to Record YouTube videos. (This section may not apply to most people in the situation but relevant) Everything was going fine and I did not even think it was related when first my subscribers started to complain that they could barely hear me and that my voice was low something they had no issues with before. Also after that a subscriber explained that when listening to my videos on YouTube they could only hear me from the left side of their headphones.

Finally I also noticed that the sound from the loudspeakers from my phone was now lower and in the past they were loud.

The Issues/Symptoms of the Problem:

Note you may notice one or a combination of these issues.In Summary the symptoms of this issue include:

1.Callers to your phone are unable to hear you.Same applies if you call someone.

2.Loudspeakers from your phone may get noticeably lower.

3.If you use your smartphone camera for YouTube Videos you may get complaints that you are speaking low or video audio is low.

4.Again if you use your Phone camera for videos on YouTube viewers may complain that when listening to your videos using a headphone they can only hear from the left ear or one ear of the headphones.

5.There may be other issues but these are the ones I noticed while having the problem. The YouTube problems only applies if you use your phone to do YouTube videos otherwise ignore that part.

So as you can see guys the issue sounds allot like speaker issues or Mic issues and it is but not what you may think,the fix is very simple and will cost you nothing.

What devices can this issue affect?

I had the issue with a Galaxy S6, but due to the nature of the problem this issue could happen to any Smartphone which includes: Galaxy S8,S7,S5,S4,S3,S2,S1,Note 1-7,,Any iPhone,HTC,Motorola or other branded phone that exist or will exist. So if the problems described sound like your device or similar then go ahead and attempt the fix.

How to fix the Issue?

This is the fun part of the article.You can read the article or watch the video below to see how its done:

1.Get a toothpick. A pin or other pointed object could do but I don’t recommend that as you could damage your device if you are not careful.

2. Turn your phone over to its base or where the loud speakers are as shown in my picture which I took before I fixed the issue as seen below: 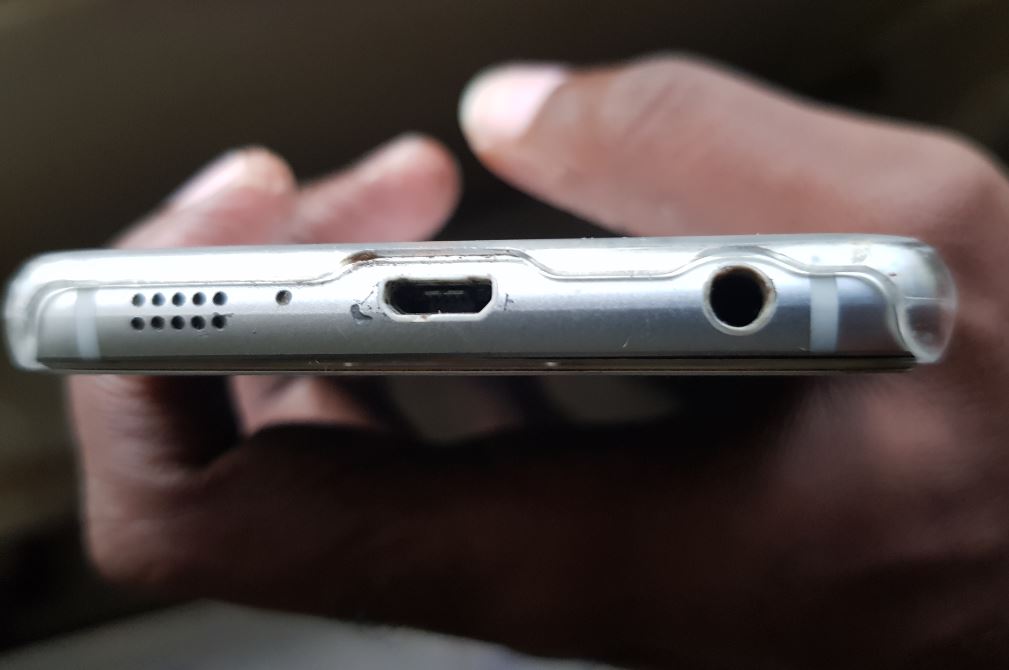 Do you notice something about the hole for the Mic (Single hole on the left)? If you say yes there is dirt clogging up the Mic hole then bingo you are correct. Not only that but the dirt was also clogging up the loud-speaker grills as well. But the one that was causing most of the issues described above was the Mic hole being clogged up.

3. Use the toothpick and carefully insert it into the hole for the Mic and carefully remove and dirt or particles clogging the entrance. You will need to shove it inside a bit but remember not to over do it as I will not be responsible for you damaging your phone. Use a picking motion to remove the dirt. You can blow into the hole as well to see if that helps to loosen any dirt particles and turn the phone over for them to fall out.

4.Next do the same for the ten (10) speaker holes that are to the left of the Mic, if they are clogged they can cause the loudspeaker volume of the phone to become low or lower.

5.Call a friend and see that he can hear you as clear as ever. Play some music and see that the phone is noticeably louder. Finally if you use your phone for YouTube try recording a fresh video and see that the overall volume is louder and if you play back the videos on your phone and connect a headphone you will hear from both the right and left speaker.

What was the Cause of the Issue?

The issue was caused by dirt clogging the Mic of your phone and also the speakers. The Mic had the worst effect, Dirt can build up in modern devices as you use them on a daily basis. Especially if you live a active life and work with your phone close by indoor or outdoor.

Why did this Work?

This worked because we were able to remove the dirt clogging the hole of the Mic. When the Mic holes of any phone is clogged those that call you will not be able to hear you. This can range from not hearing you at all to barely hearing you.This problem can also affect video recordings with your phone as the audio will be low, if you put said videos on YouTube people will complain of volume being low or they can only hear you from one ear on their headphones.

When the loudspeaker is clogged this results in sounds from the loud-speaker being lower or muffled and that’s the main effect of those speakers being blocked, its less annoying though as most speakers have several holes so its less likely to become completely blocked.

I do hope you enjoyed this article as much as I loved putting it together for you. I do hope your issue with your phone is now fixed and you will keep this fix in mind for the future as this could happen to you or another friend and you can then refer them to this article by sharing or showing them how its done. Please leave a comment below and share your experience it may help another user out.