Today’s article will be a disassembly post and Video focusing on how to actually disassembly or open the RCA Cambio in case you want to do some repairs. The general procedure should be the same as on most other Windows Tablets so you can follow along and learn how to actually open or pull your tablet apart.If you have any question you can ask them below and I will be sure to get back to you ASAP.

1.The device is not powering on and you need to repair it.

2.You want to change the display as its broken.

3.You want to change or replace the speaker.

4.To replace the battery.

5.To replace the Main Circuit board.

or Any other reason you may have that involve getting on the inside of your Tablet.

What you will need?

You will need a Phone openingor Tablet opening tool set. If you have a general Multi-tool set that has a variety of screwdrivers you should also be good.

You can watch the Video below or read the instruction that follow or both.

How to Disassemble the RCA Cambio Tablet?

This Tablet is a great Tablet in terms of its ability to repaired you can easily replace any of its parts which you can find online on websites as Amazon, Ebay or find a broken one and scrap it for parts. To open the Tablet:

1.Turn the tab on its side and get the very small Philips screw driver and look for all the screws that’s located on the Tablet and remove them,there are nine (9) in total.

2.There are three (3) on the side with the power button,two (2)  on the back towards the bottom,two (2) on the left side and two (2) on the bottom beside the connector for the attachable keyboard.

3.Once all screws are removed you will need a pick tool as shown in the video which is included in all Tablet and phone repair kits. Now use the pick and get into the groove that holds the screen and the case together its on the front of the device towards the edges. Get it in there and if you have suction cup attach it to the screen and while you get into the groves and move around the sides which will separate the tablet, carefully lift the screen away from the body of the tablet. Both halves should separate. 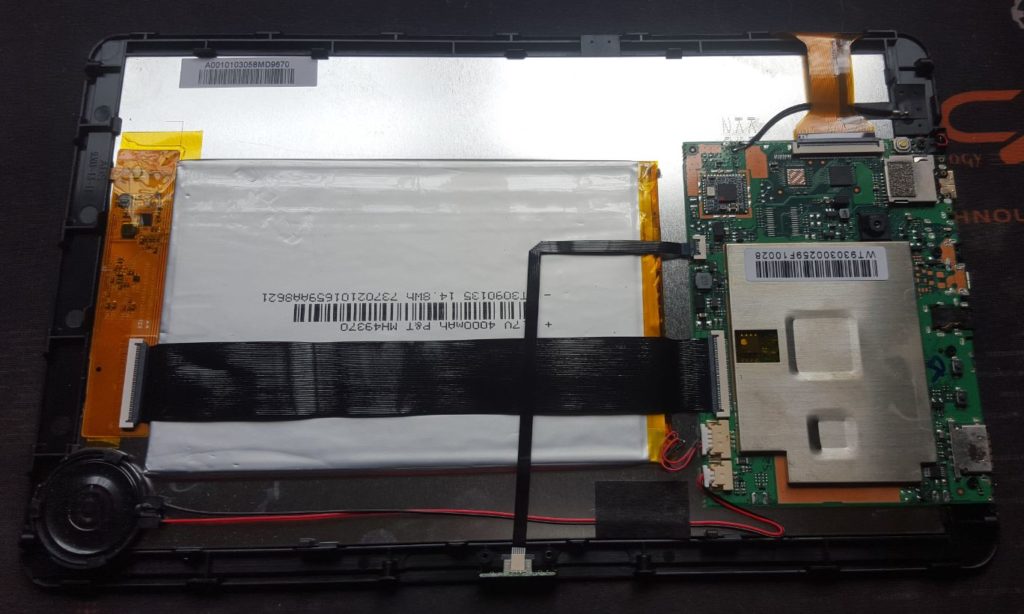 Pro Tip: Its always a smart idea to take a picture of any Gadget you open so later on you can refer to it in case you forget what goes where.

4.Once separated all the main components will be on the side with the display. You can now do a variety of things such as if your Tablet was not turning on you can try disconnecting the battery. Its simple identify the battery and then unplug its connector it should with a firm push separate easily. You can then leave it out for a little while and even hold the power button while its disconnected and then after a while reconnect the battery. The Tablet will power on again. I have use this to fix many Tablets and phone that will not power on.

5.To replace any other part is easy: To replace the speaker simply like the battery unplug in and remove the tape and it comes right off and yo can replace it. For any other component that’s connected by ribbon cable which is the other connector tip flip the black tab up that’s holding the ribbon in place and slide it out. Using this you can remove most other connectors. From here its easy to unscrew and remove the circuit board, battery or even the display and replace it with a new one.

Here are some more cool tips on Tablet Repair that you may want to try out in an attempt to repair your RCA Tablet that’s not working as it should.

I l;like this Tablet as it easy to repair or replace anything on the RCA Cambio, some tablets are not that accommodating. So if you found this useful please take the time and share what problem you were fixing or part you where replacing below in the comments. It’s always great when readers share their findings with others as it helps others out that may be having issues as well. Also do share this article and check out a few more we have plenty.