So I recently encountered a Samsung Galaxy S6 that became frozen and unresponsive all the time which was a big issue to the user. We were able to fix the problem after much trouble shooting and I thought I would do this article to show you guys how to fix the issue and some other things you may want to try in order to get your device working again like this Galaxy S6. This should also apply to the Galaxy S6 Edge as well.

The Problem or Issue in Detail:

When your device is experiencing this issue the Galaxy S6 or S6 Edge will work fine one minute and then when you are using your device it will become frozen or unresponsive and your phone will stop taking touch input. I have noticed that the power, home and volume keys work or the physical buttons but nothing else. The phone may also become frozen at the home screen and you cannot enter your password. In my case I was able to trigger the behavior whenever I browsed through the gallery it would freeze up every time or at random while doing other stuff.

The only way at first I was able to regain some functionality was to force restart as normal restart would not work and I had to do that a few times before functionality would return at random.

How to Fix a Galaxy S6 that is Frozen and become unresponsive? 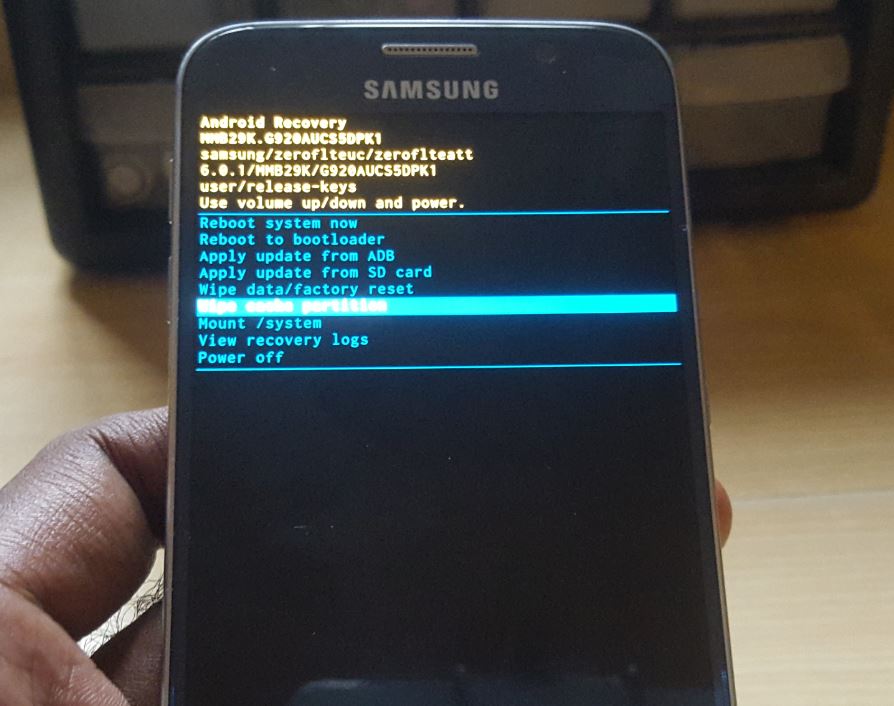 1.First I suggest to actually power off the device by doing a force restart by Holding down Volume down+ Power and Home button, let go as soon as the screen goes blank and the phone should force restart. When it boot back up you should have some functionality out of the touch screen if not repeat the force reboot a few time until you do. After you have touch function again power down the phone fully.

2.Now boot into recovery by holding down Power+Home and Volume up while the phone is off. Let go of power and keep holding home and volume up when you see the first logo pop up on-screen. Allow the phone to do its thing and boot into recovery mode. You should see an Android guy you never seen before in most cases.

3.Once in recovery use volume up and down to navigate and select: Wipe cache partition and use power to select the option. Choose Yes and the Cache should be wiped dont worry you will not lose any data. Next select Reboot system now and allow your device to boot back up completely.

4.That’s it your device should work fine and not give any issues or become frozen again.

In some cases the issue may be so sever that simply wiping the cache as above will not work and you will need to reset your device. First backup your pictures, data and contacts. Next repeat steps 2 above.

1.Once you are in recovery again go ahead and navigate to Wipe data/Factory reset.

2.Select the yes option and allow the phone to be wiped.

3.Reboot system now when given the option.

4.The boot up will take noticeably longer do not panic. When it reaches the setup screen be sure to setup your device as normal and when finished you will have access to the phones interface. If you loose responsiveness siply do a force restart as above and re-run the setup process.

5.Finally this should do and your device should work fine. Also do a quick reboot after that first wipe of your device and test to see if the issue has been fixed.

Why Did this Work?

It seems after using your device for a long time cache can build up and cause your device to Freeze or become unresponsive. This is after lots of photos over time and apps on your device. The way to fix this it seems is to actually to clear your devices old cache in its entirety as shown above or Wipe the device clean.Some time Clearing cache alone might help but in severe cases the device will need to be wiped or totally reset.

I also noticed that booting into safe mode did not fix the issue for me as I was having issues even in safe mode while I was trying to fix the issue which indicated to me that it may not have been a software on my device and that it was something else causing the device to become frozen.

Other Things to try:

I suggest that if the above does not work you also try the following:

1.Take your device in for repair as your issue may be caused by a hardware fault and something needs replacing or repairing.The steps above mainly targeted Software Issue and if the above did not help its a Good indicator you are dealing with a software issue.

2.If you are capable open up your device and check the connections related to your touch screen if a component is loose it may be the cause of the touch related issue you are experiencing. Might have been caused by a drop your phone experienced or something else.

I do hope the above was able to fix your Galaxy S6 or S6 Edge that was freezing or becoming unresponsive as it did for me. Please take the time to share, comment and do check out a few more articles we have plenty.