If you have attempted to charge your Samsung Tablet and it refuses to  charge or power on we know the feeling and I am sure you have been scouring the internet in attempts to find a fix for this issue. Well I am here today to provide you with the Samsung Tablet not charging fix so as to get your tablet back to full functionality and save you a trip to the repair shop in the process.

What Cause the issue of My Samsung Tablet not Charging?

There is no simple reason for this and as you will learn that every situation is different, however the most common causes are faulty chargers or a corroded charge port as often the cases with the Samsung Phones as well in most cases if you are lucky. Other severe cases involves a totally drained or dead battery, but do not worry as we have a fix for each of the situations mentioned so rest easy. 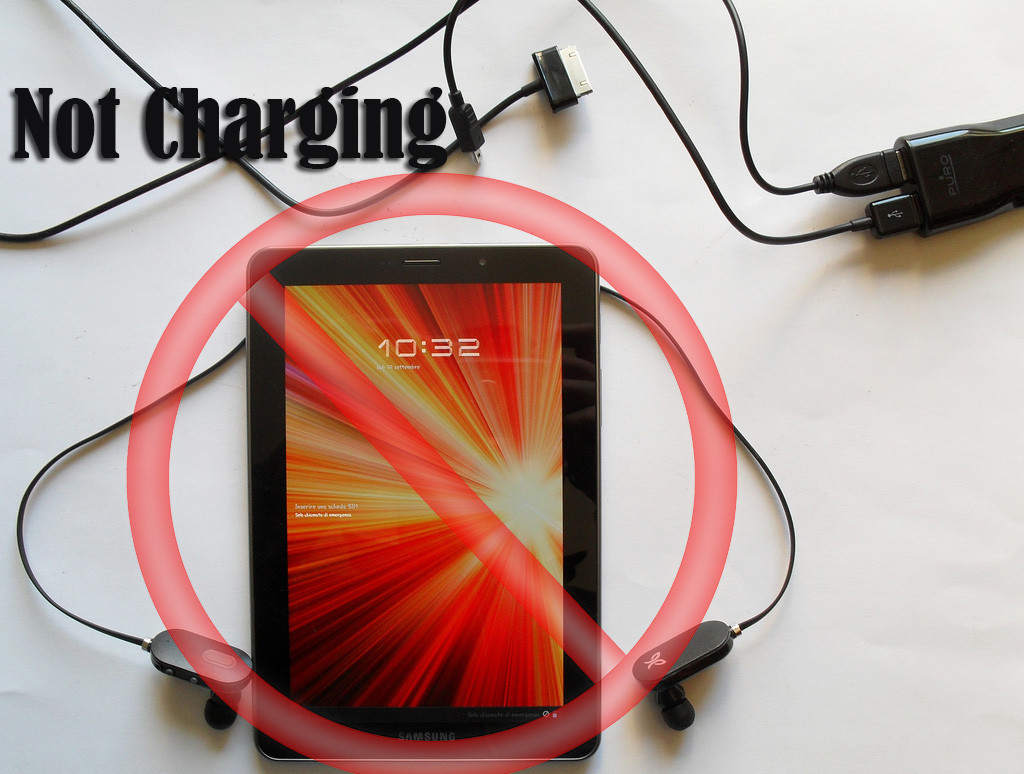 What devices will this particular Fix Work on?

This fix will work on Any Samsung Tablet or other brands of Tablets as the problem is not limited to the Samsung Galaxy Tab series alone, so if you have a different brand of Tablet this should still work for you.

How to Fix the Samsung tablet not charging Issue?

This issue is very common among Samsung owners where the Galaxy tablet is not charging and this renders the device unusable, the solution varies from tablet to table but I assure you one of the following will work:

Clean the Charge Port and Charger Tips of Dust and corrosion

1. Find the charge port and blow into the slot or use canned air to dust the area clean and do the same to the end of the charger that is placed into the tablet. Try charging once more. Repeat at least three times before giving up.

If all goes well a charging battery icon should appear on-screen, seeing the battery is completely drained give it some time to fully charge before attempting to power up completely. I have also realized that if the wall outlet is not charging your device try connecting it by USB to the PC, which also works in getting it to work once more in some cases.

Another method that sometimes work in getting your tablet to start charging once more is to :

1. Attempt to charge your Tablet and then after a some time while still plugged in: Hold the Power button + Volume up

2. If the above does not work try Power button + Volume down. If there is a Physical home button sometimes you will need to hold that too.

This in some case can cause the Tablet to power on and charge.

Check your Charger and Wall outlet

As crazy as it might sound sometimes the problem is the charger itself causing the Samsung tablet not to charging issue as there is a short in the cable or the wall outlet is faulty, switch wall outlets and chargers you might not think thats the issue but in some cases it could be the culprit and try using the original charger and cables, you can consider borrowing a friends pair as a test. If this is the issue then get a new original charger.

Sometimes the reason a tablet is not powering on is because of loose internal cables that might have been caused by a drop, this issue may manifest itself right away or later on in the life of the Tablet. So:

1. Open your Tablet you can consult the video and instructions below on opening a Tablet.

2. Check the battery cable that runs to the motherboard and make sure that its tight and snug. Also you may have to totally disconnect and reconnect it.

1. Get a blunt object and find the seams that are located around the tablet and place the blunt object within the seams, a Tablet opening tool kit will also work wonderfully in opening Tablets like this.

2.Once you have pried the blunt object into the seams run it along the tablet edges until both halves separate, the clips that hold the tablet together will come undone.

Here is a video that demonstrates, it’s a different tablet but all tablets open using the same or similar principle:

3. Locate the battery of your tablet and find the negative and positive terminals that should be marked, Black wires usually indicate the negative(-) terminal and Red the Positive(+), I suggest that you use a 12 Volt battery to hook up to the appropriate terminals , as in negative to the negative side or pole of the battery and positive to its correct pole. This should force charge the battery and it should power on and start charging once again, if it refuses to keep charged then you may want to consider a new battery, or that the charge port could be damaged on your device and needs replacing or keep your new make shift battery pack your choice.