So the speculations are over and the official features and specs of the iPhone X are out. The device itself is a radical new look for Apple with a bunch of new features that are a first for the iPhone. The iPhone X starting price will be $999 and you can pre-order the iPhone X or iPhone ten (10) as it pronounced on October 27 and the device will be available to the public on November 3.The new design is stunning and really eye-catching and you can expect that all devices moving forward for the next few years will draw design ques from this device. The price is really expensive but Apple fans are gearing up for the pre-order dates and the eventual release which should follow soon after.

You can also bet that as soon as the iPhone X which will be produced in limited quantities will be sold out soon after going up for Pre-orders as most users are skipping the iPhone 8 and going for the all new look and design that the iPhone X has to offer seeing it has the most changes and impressive specifications and features as shown below.

Features of the iPhone X:

The display will be dubbed a Super Retina display at 5.8 inches with a resolution of 2436 x 1125 and a ppi of 458. The technology behind the screen will be OLED technology for better brightness and vivid colors including deeper blacks. The display allows the device to be thinner with better contrast and greater resolutions. The display has 3D touch and HDR support.The home button has also been removed and the device now features a cool dock. The ears at the top of the device with the camera and sensors in the middle will display time on the left and signal strength and battery percentage on the right ear. 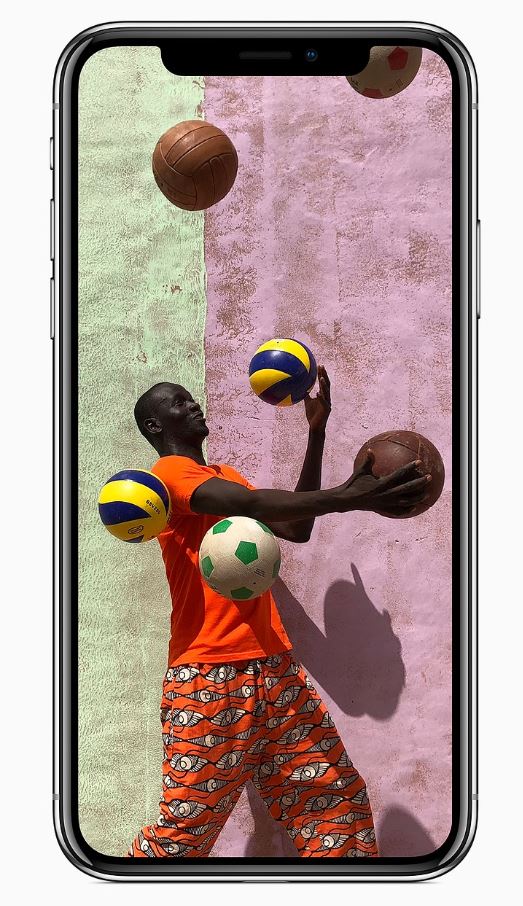 Which is Apples take on face recognition will be used to unlock your device as Touch ID has been removed from the iPhone X. There are a bunch of new sensors on the front of the device which are mainly used for the Face ID feature. In total there are 8 sensors which includes a : Dot projector,Flood illuminator,infrared camera, speaker,Microphone, Ambient Light sensor and proximity sensor.The chances of some one unlocking your device as they have a similar facial structure is 1 in a 1,000,000 versus touch ID’s 1 in 50,000 making this way more secured over touch ID and anything else similar the competition may have in Face detection and unlocking.

This is Apples updated take on Emojis where the new emojis are animated using your facial expressions and you can record your voice to them and send them to friends.This seems like a fun new feature which ads added dimensions to the already beloved Emojis we already use in instant messaging.

Finally Wireless charging is coming to the iPhone and Apple is calling the new technology which will charge their new phone and other technologies Air Power, lame name I know but if it works for Apple.The Wireless charging uses the Qi standard for its devices.You will be able to place your new phone and Air Pods and so on the new Pads which are sold separately and charge your devices without the need for Wires.

A first for the iPhone again is the inclusion of Fast charging which will allow you to charge your device by 50% in 30 minutes but to take advantage of this feature you will need to get a special Fast charger which Apple will not be including in the box with your new device so you will have to buy separately.

The body of the new device is made from Glass and stainless steel. The Glass is mainly featured on the front and back of the device. Everything has also been microscopically sealed. The main finishes will be the Silver and the black.The phone itself will weigh 174 g (6.14 oz) and is IP67 certified for dust and water resistance.

The phone will feature a main camera with Dual 12 MP with f/1.8 & f/2.4, phase detection autofocus, OIS, 2x optical zoom, quad-LED (dual tone) flash.Its also said that the Camera will support 4k at 60 fps which is a first for any Smartphone, in fact some high-end DSLR professional camera do not have this feature.

The device has 3 GB RAM and you can go with 64 GB or 256 GB versions. The processor is a Hexa-core (2x Monsoon + 4x Mistral) and features the Apple A11 Bionic Chipset. The GPU will be an Apple GPU three-core graphics with iOS 11 at launch. Performance benchmarks have surfaced online already for the iPhone X and it blows every other device currently on the market in terms of bench marks out of the water.

The battery will offer 21 hours of talk time, 12 hours of internet browsing, 13 hours of video playback and up to 60 hours of audio playback for music lovers.We will have to see how well this holds up in the real work at the end of the day.

Get a iPhone X case Now:

You know what sucks? getting a new phone like the iPhone X only to realize you did not get a case and you have to wait until its delivered while you can’t show your phone off by taking out with you. Worst of all you don’t want to drop a $1000 dollar phone so get a great case and order now and have it for when your iPhone X arrives.